It has been said that politics is involved in everything in Louisiana. During my 36 years as a

Louisiana state employee, I found that statement to be not only true but the law of the land! It is not surprising that Louisiana politics found its way into the recovery and marking of the meridian portion of the 1841 Joint Boundary Commission line by the Louisiana Geodetic Survey (LGS) in 1939 and 1941.

In the early 1930’s the United States Geological Survey (USGS) was in Louisiana establishing a network of control points based on latitude and longitude. Each control point was marked on the ground with a concrete monument topped with a brass cap. These control points provided the framework for the topographic surveys and aerial photography required to produce a series of topographical maps covering the state that remains in use today.

LGS developed a plan to integrate the mile mounds established during the 1841 Joint Boundary Commission survey with the recently established network of monuments set by USGS. The plan resulted in a latitude and longitude being developed and a permanent monument being placed in the approximate center of each of the mile mounds found along the Louisiana-Texas boundary. The permanent monument was made of concrete and topped with the standard bronze disc of the Louisiana Geodetic Survey. The brass discs were inscribed alternately with the name of a former governor of Texas and Louisiana. LGS completed their survey in October 1939.

As calculations and adjustments were performed with the field survey data from 1939, numerous

In May 1941, Mr. William B. Benjamin, Cadastral Engineer of the Louisiana Geodetic Survey, was assigned the task of making an exhaustive reconnaissance of this line to identify the original location of boundary markers. Benjamin found that the mile marker mounds whose heights were once were 5 feet, were found to average only 2.5 feet in height. Instead of being 15 feet in diameter, the mounds were found to vary from 9 to 21 feet in diameter. Using the 1939 survey data as a starting point, Benjamin was able to recover glass bottles and other evidence that was placed in earthen mounds along the line in 1841. Benjamin marked the mile marker mounds he verified with a concrete monument with a brass cap stamped with the mound number. As we will see, Benjamin was also instructed to perform other tasks by the LGS office.

When Huey Long was assassinated in 1935, his political machine could not come up with a unanimous candidate to replace Huey in the upcoming governor’s election. A relatively unknown politician, Richard Webster Leche was selected as the compromise candidate for Governor and Earl Kemp Long was included on the ticket as Lieutenant Governor.

Richard Webster Leche was governor of Louisiana from May 12, 1936 to June 26, 1939 when he resigned from office amidst a truck selling scandal. He was convicted of mail fraud in June 1940 and sentenced to 10 years in prison. Lieutenant Governor Earl Kemp Long assumed the office of governor upon Leche’s resignation. Long served as governor for the remaining portion of Leche’s term but was unsuccessful in a run for his own term as governor. Sam Houston Jones defeated Long and served as governor from May 14, 1940 to May 9, 1944. Governor Jones’ election marked the end of a 12-year reign of the Long faction in Louisiana politics.

There is an entry dated July 17, 1941 in William Benjamin’s supplemental survey report that states “We went to Mon. Leche in mound #3; filed off the name Leche and stamped on the name Jones; according to instructions.” What would cause someone to instruct Benjamin to do such a thing? It is not known if the order to change the name on the survey marker came directly from the governor, but it does make sense that the “anti-Long” governor would approve of Leche’s name being removed from the survey marker when Benjamin was surveying the line in 1941.

The 1941 survey was quickly wrapped up in December 1941 after the bombing of Pearl Harbor.


Information contained in this article is adapted from pages 113 – 124 of Evolution of the Texas - Louisiana Boundary: In Search of the Elusive Corner. Copyright © 2017 by Jim Tiller and John P. Evans, Jr. 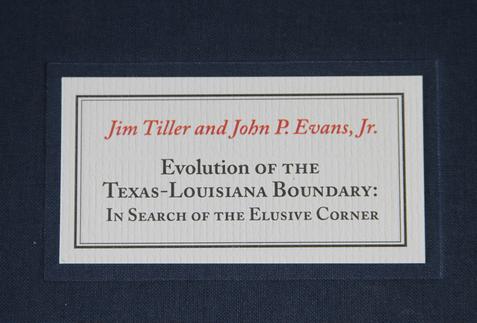 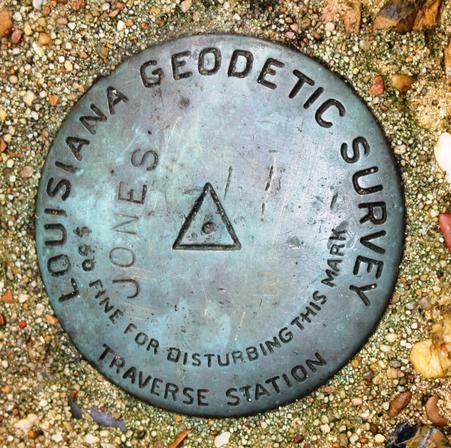 Normally the museum does not offer items for sale. We are revising our exhibits and have removed several European Clocks . These clocks have been replaced with U.S. manufactured clocks. Clocks for sale were running when on display and are from Germany, France  & England.

We also have for sale a collection of Maps which have never been on display. These hand colored maps are from various 1800 publications; they are individual sheets (most have a a map on the reverse). The collection includes maps of both the U.S. and foreign countries.

All sales are final with no guarantee nor return. Should you have an interest, contact the museum for additional inform​ation. The museum is closed

The subject being addressed is the Boundary Survey of 1841, Between

The Republic of Texas and The United States. This survey was the first

attempt to locate on the ground the boundary of  The Louisiana Purchase. Today it is the common boundary of Texas, Louisiana & Arkansas.

We will provide articles for this space on a periodic basis.  The subjects will be related to items, subjects and/or exhibits featured in the museum.

We invite individuals to submit articles of interest. Your article will be considered for future publication. Please provide source and proper credit for submitted information.

I could not find any trace of Leche's name on close inspection of the brass cap for Mile Marker 3. Can you?